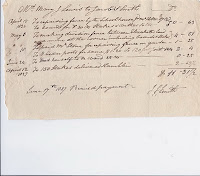 Interacting with original historical materials available in repositories helps an individual identify his place in society and create personal connections to the past. Archival records reflect humanity and allow readers of documentation to relate to historic events and the people who played a part in them.

The stories discuss how separate boys made profound connections to archives. They learned that the writers of original documentation recorded personal experiences of historic events that could not be re-created in another form.

The implications of this are far-reaching. For one, as more and more libraries and archives have funding cut, fewer and fewer people will be able to experience that direct link to history. The feeling of touching an original manuscript and knowing that a person who lived hundreds of years ago also touched it cannot be duplicated. While we may be able to copy the informational value of a document, we cannot reproduce its inherent feel or smell that awaken the senses and stretch our imaginations. An examination of an original also promotes self-discovery, allowing us to see the minutiae that can be missed in copies. The environment in which one "experiences" a document is also lost -- admittedly sometimes for better (for those who want to argue that point,) but also sometimes for worse.

As we move farther away from original research, we are allowing are youngsters to think that everything there is to be had is available on the Internet. While we fret about the younger generations losing face-to-face social connections to their preference for texting, we should also be concerned about losing touch with heritage items. The uniqueness of individual historical documents in their form and function is lost. The question of how a document arrived in a repository, though not always prompted by archivists, is arguably an inquiry more readily raised by a researcher in an Archives than one viewing the document on the Internet. The provenance of the document, including who owned it and the path it took to be placed before one's eyes at this very moment can be powerful.

This is not a rant against technology. In fact, I think that technology can often be an important first step toward encouraging an individual to make a personal connection to history. More people than ever before have access to the information found in documents because of the Internet. It is also a powerful tool for encouraging exploration through collection guides, lessons, and stories about the use of archives. It also allows us to cut down on the use of fragile documents that can be damaged by excessive handling. However, digitization of archives should take place hand in hand with the care of original resources. Individuals also should be encouraged to interact with originals whenever possible. It is akin to understanding from where our food comes. If we don't understand that archival repositories exist to care for materials and to provide access to them, why should we value them? Why should we want fresh fruit instead of canned?

I carry a box of materials around with me for presentations. (Regular readers of my blog know that I like to frequent antique stores and pick up interesting bits on my visits.) Whenever I pull the box out for my students and audiences, the first thing they want to do is to touch the items. In a presentation to an adult audience yesterday, a woman in attendance remarked that a 19th century receipt that I had was written with a brown ink similar to a family Civil War document she had in her possession. She asked how they made ink then. She began wondering out loud if the soldier in her family might have made the ink with a natural material he found rather than carrying a bottle with him. We also noted the differences between the old paper and papers made in the twentieth century. We noted deterioration as well as content. I then pulled out a school girl's autograph book from the late nineteenth century. They commented on the small size of the object and remarked that the book reminded them of similar books they kept as youngsters... These are observations that are best made when the original is present and accessible to the viewer.

The final point to take away from these discussions, and from the weekend's articles, is that making personal connections to history is easy when the public is given the opportunity. Archivists and related professionals are challenged to create such opportunities that will appeal to wide-ranging audiences.
Posted by archivesinfo at 8:47 AM