Artifacts and Information: Crossing into the Sciences

One of the things I love most about being a librarian is the chance to be in the world of Shakespeare one day and to be exploring Marine animals the next. Usually I only get to do this through research, but yesterday they let me out of the school library to take a field trip. As an archivist who specializes in local history, I had quite a treat as we explored the shores of Rye beach in New Hampshire and took a boat trip off the Isle of Shoals. I took the trip in part to help me better assist students with a big biology research project they do each year. What I discovered is that this trip and project lend themselves to collaboration across multiple disciplines. I plan to inject what I learned into the library work that I do.


I started my day by bringing into school a bird's nest I found while gardening. I had been meaning to bring it in to share for awhile, but I think I finally remembered to actually do it since my head was anticipating a day in nature. I think that most people see birds' nests as part of the field of science. When I think birds nest I think about Audubon's drawings; I think about Wonder cabinets, stuffed birds in libraries that were popular in the nineteenth century, the specimens of birds I first saw at the Vanderbilt Mansion where I volunteered in high school; I think about the birds who frequent my garden who are different year to year ["the cardinals won the prized tree this year for their nest"]; I think of the stories behind the places where these animals go; I think of collecting; I think of the human hand in the natural world. In short, I think history.

So, it was a treat to visit the New Hampshire coast - so rich in history and sense of place. Students were brought to different stations to learn math and science concepts. History was popping up everywhere. One station in particular made me interject my librarian thoughts. Older students were teaching younger students about the science at the shore. At the salt marshes, they began talking about a business that had dumped sewage into the habitat years ago. The ecosystem was damaged by the actions of that institution. The students' sentences, so sure about their scientific information, were suddenly punctuated with "I think...this is what I was told...this could possibly have happened." I began thinking about our news database. I began thinking about the Portsmouth Athenaeum not far from where we are. I thought about the Seacoast Science Center that must have information about this event in their archives.

I interruppted, "Finding out exactly what happened here would make a GREAT research project." They stopped, looked at me, said "Mmmmhmmm," and moved on. As a high school teacher librarian, in a moment like that, all I can hope is that I planted a seed in someone's brain.

On our trip, I got to play with a vibrating fish, a star fish arm, periwinkles, crabs, rocks and more. These are the "artifacts" of my science colleagues. They collect them like I collect books and archives. They collect nature while I collect man-made material culture. Humans are all collectors, categorizers and information gatherers at heart! 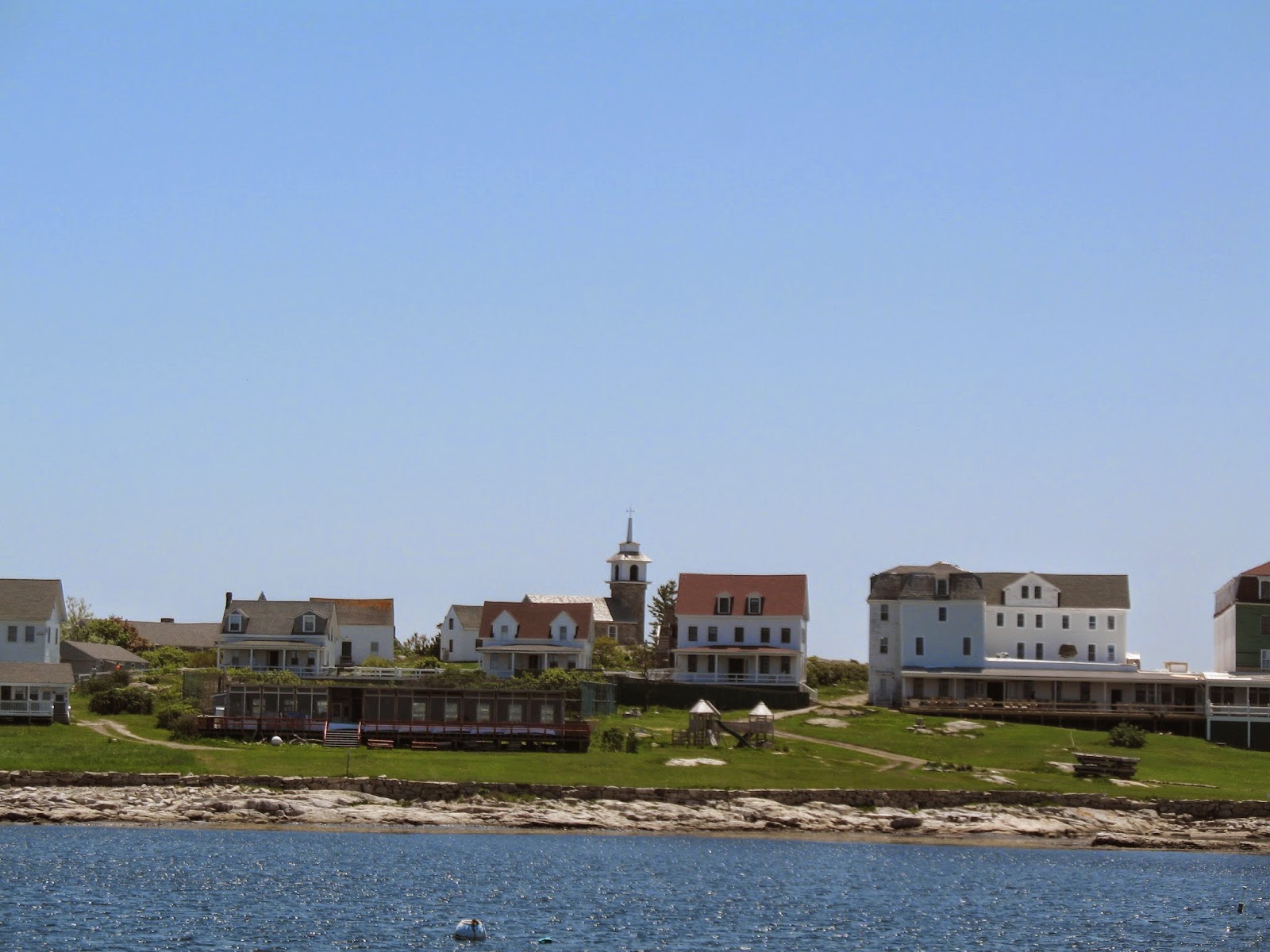 It was seeing the Isles of Shoals  that got my liberal arts side purring. Author Celia Thaxter grew up here. This is where she and my beloved Childe Hassam drew inspiration. This is where Thaxter would bring the plants that she loaded on a small boat in Portsmouth to restock her famed gardens each spring. [see An Island Garden]

As we traveled out to the island, I told some of the students, teachers, and chaperones what I knew about Celia Thaxter. Right in this spot was science, math, history, literature and art rolled up and just waiting for us to explore. So much to see. So much information to take in. So much learning to be done!

I look forward to visiting the Island this summer. It's been calling me for twenty years. It's time to land there. Maybe some of my students' thoughts will follow me there too. Maybe there is another field trip in order.

Many weeks ago I promised a post about the right to copy from archival collections. I will publish that post soon. I have been working hard on it and am backing what I know with research. Copyright is a complicated subject, so I do not want to start people off with basic misinformation. Stay tuned...

Posted by archivesinfo at 8:38 AM No comments:

We have been commemorating the sesquicentennial of the American Civil War for years now. My twitter feed has been noting archival projects, social media blitzes, major reenactments, and museum exhibits throughout the events. Cultural Institutions began planning years in advance.  Internet outreach has enabled us to build up interest and create long running projects that aim to keep people engaged. I have very mixed feelings about these activities and while I tend toward the opinion that they are a good thing, a little piece of me thinks otherwise.

One way that cultural institutions aim to get the public involved is through Crowdsourcing. A good example of this is a project through the University of Iowa.

Saylor and her colleagues “crowdsourced” the Civil War by digitizing the letters and diaries and making them available to the public. They created a website where transcribers can choose a document, transcribe it in a niffy box, and email it to them for review.

Goals: To get the public involved, highlight a major event, and get much needed help for making archival materials more accessible.

The Civil War events are having a small lull. According to the civilwar150 site, not much of significance happened during the War in the spring and summer months of 1864. My Twitter feed on the events has been quiet. Perhaps, it's a good thing that the centennial of WWI is getting underway too so I have more commemorative articles to link to. (Am I being fascetious? I'm not sure. That's what I'm here to discuss.)

The United States World War One Centennial Commission has a wonderful web site to remind us about this oft forgotten catastophic event. 100-years after a War, it is easy to see it as ancient history. It is easy for us to forget how the events of the past have lead us to where we are today. The roots of Russian history and conflict go back this far, for one thing. As one example of the need for remembering our history - Understanding events in the Ukraine today can be related to World War One. And, yet, my mind still questions this "celebration" of anniversaries.

I fall victim to anniversary syndrome. For a Town's 250th I think, "let's do it up!" For my school's fiftieth I say, "let's plan retro events and highlight our community!" Anniversaries give cultural heritage professionals a chance to pull in the general public, to help them get as excited about history as we are. In some ways, these celebrations are artificial constructs. We can find an anniversary for anything and make it worth celebrating, but is that a bad thing? If the general public wants festivities to get excited about history, the fact that they are interested is a good thing, right? Anniversaries allow archivists to convince people to dig through their attics and basements to find materials that document our history. Society has used anniversaries to highlight our heritage for at least hundreds of years. We have highlighted war in this way for probably thousands of years -- from stitching battle history into tapestry to honoring our Veterans with special days each year.

2014 will mark the 100th anniversary of what we now sadly know as The First World War – it would never be The War to End All Wars.  As we look back over the century we should remember that these men did not die in vain – they fought a war that, like the one that followed only 25 years later, was necessary to contain the territorial ambition of a major European power.  About one hundred years before the outbreak of the First World War British and Allied troops had defeated France at the Belgium village of Waterloo - and contained a major European power.
Remember the courage and honour the sacrifice of the boys who became men 100 years ago and support the young men and women who have followed in their footsteps and are today's soldiers.  - (from Spirit of Remembrance  web site - "Battlefield tours for discerning travelers")

I am a bit troubled by the hoopla. How do we pick and choose what anniversaries to mark? What anniversaries are we forgetting? Are there under-documented events/wars/communities that need more attention from the governments that sponsor them? Are we glorifying War -- molding it into something romantic through a "celebration?"  Are we all doing all of this for the right reasons?

To be sure, much good work is being done. These anniversary events deserve remembrance. Cultural heritage institutions could use the boost, excitement, collections, and donations that come from these events. It is a fine line to walk. Anniversaries, especially those of war, deserve related activities that suit the occasion. We need to remember that these events involve people. We need to remember without a sense of adventure and without romanticism. We need to ensure that our communities are boosted by our commemorations. We run the risk of trivializing terror and giving an amusement park atmosphere to what should be solemn memorials.

Let's remember this as we go on to mark the third year in our commemoration of the 50th anniversary of the Vietnam Conflict.