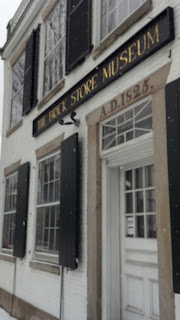 While driving into Kennebunk to do some research earlier this week, I noticed a sign for the Brick Store Museum. I have heard many good things about this institution, but I couldn't remember specifics. (Now here's another reason I love Twitter...) I tweeted, "I've heard good things of the Brick Store Museum and here it is right next to the library.... Shall I try to fit it in later?"  My friend Sarah @greenmuseum tweeted back, "Yes, you should." And so I did. And I am so very glad that I did! (And if you don't know Sarah Brophy and you are in the museum field, you should get to know her. She is the brilliant author of The Green Museum and Is Your Museum Grant Ready. She has guest posted on the ArchivesInfo blog too.)

First Impressions
I walked in and was greeted immediately by a friendly person. I was given some information about what I was about to see and was shown brochures about the institution. I asked if I could take pictures. YES! So, I am happy to share some of the remarkable things that I saw with you.

The entrance featured information about a museum renovation and was followed by an exhibit about historic homes in the region. Photos of the homes were accompanied by text about the history of the homes, owners, and architecture. The exhibit explained architectural elements and the development of architectural styles in the United States. It was all very interesting and there was quite a bit of information with context. The colors were fabulous. I was invited to interact with exhibits, but I honestly do not remember the specifics of that. I had been told that there was an exhibit about the museum founder in the back. My interest was piqued -- My personal preference is to view an exhibit about historic people over one on architectural history. I had planned to return to the architecture if I had the time. I didn't because I spent so much time on part II. (I should note that it was lovely that the museum had both. Many people will prefer the historic building exhibit.)
Swept off My Feet 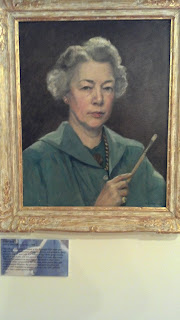 I'll start by saying that I am now enamored with the historic figure of Edith Barry. Rather than tell you about this remarkable woman, I refer you to the Brick Store Museum's web site that has a good movie about her along with other information. (The video is not nearly as dynamic as the exhibit itself and perhaps more consideration can be given to that for future exhibits, but it is informative. It is also wonderful that they thought to add a video to their web site.) About Miss Barry, I will just say that I dare any person interested in remarkable people to not be impressed by her. I doubly dare any woman who is interested in strong female personalities to not be inspired by her.
Instead of focusing on the woman, I am going to concentrate on how the Brick Museum highlighted her story and what I most liked about it.

Right off the bat, the exhibit was eye-catching (as was the architecture exhibit in the other room.) Small details, such as the wall in the image to the right that was painted like a map with pleasant colors, made the exhibit inviting.
The exhibit was actually split in two and was separated into two rooms. The first part "Impressions of a World Traveler" focused on Barry's travels. It used her photography to highlight her story and the stories of the people and places she visited. Photography was balanced by text that explained the travels and the context of the trips -- what was happening in the countries Barry visited and around the world at the time. The text also connected this context to Modern day happenings. For example, it talked about the recent Revolution in Egypt to describe changes in this country.
Objects, photography, archives, and label text were all balanced seamlessly together in the exhibit. Documents were not added as an afterthought, as I often see in exhibits and which is of particular interest to an archivist such as myself. The different media  were used together to great effect, providing a stunning visual treat and serving extremely effectively as interpretative and educational tools. Music was playing in the background to further set an appropriate tone. 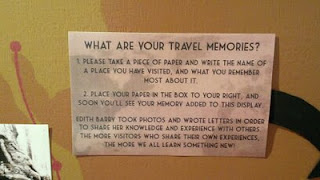 The obvious educational elements of the exhibit were also outstanding, inviting participation from visitors. The museum invited us to connect our own experiences to Barry's through tools such as this one above and to the left that asks, "What are your travel memories?" Participants were given paper and pencils to write their responses that staff would later string up for all to see and share. 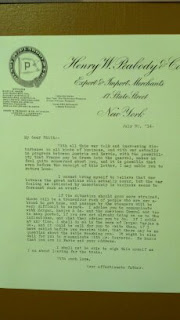 I was completely surprised to enter the second room. The travel exhibit made my visit worthwhile on its own. Somehow, I hadn't caught on that Barry was also a remarkable fine artist. Her beautiful work filled the second room. It was again placed in context, with the curators using documents and other media to tell her story.
In room one and room two, small tables held guest books and little cards for the taking that reminded me of old-fashioned calling cards and invited me to "follow" Miss Barry on Twitter @EdithBarry. I was live tweeting during my visit and sure enough, the next day, I found a tweet from the account that said, "Thank you for your thoughts! We're glad you liked the exhibit!" I am now a follower. I look forward to hearing more through Twitter and am glad that they seem to have found a way to keep visitors engaged even when they are no longer on the premises. (The only "criticism" I have is that I see before tweeting to me in February 2012, they had not tweeted since September 2011. I hope they find ways to keep the account going and to keep it interesting.)
In short, the exhibit was not only effective, but it was also captivating. I was thoroughly impressed. This is an exhibit that will stick with me for awhile because of its remarkable subject, but more I think, because of how well the subject was handled by an obviously very talented group of museum professionals. 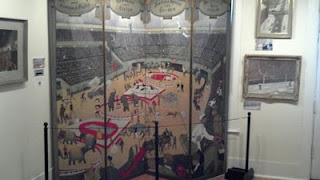 One final note: At the back of the building was a room labeled as the library and archives. I peered in the window and hope that I may have the opportunity to visit there one day ;)