Memories of Hurricane Gloria While Awaiting the Arrival of Irene

This afternoon, while preparing for the arrival of Hurrican Irene, I remembered back to Gloria's visit. I was a high school student living on Long Island. I was already an avid diarist and was a budding photographer. I dove into the archives boxes in my office and quickly found my writings about the event. I share them below. It is interesting to me to see my use of language at the age of 15 and to read the impact the storm had on me. I remember little of this. My strongest memory of the event is painting my room with my father during the storm and of heading out to see the clouds over head as the eye passed over us. It is nice to have this documentation to revisit the moment while I await Hurricane Irene's arrival here in New Hampshire. 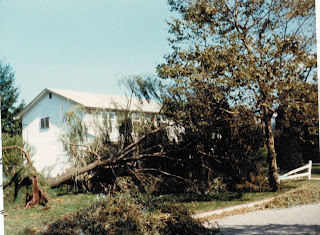 The sun was shining warmly on my back and a cool wind blew in my face.  opened my stride and flew off my toes as I prepared for my net X-Country race. It was the morning of the scheduled Suffolk Coaches Invitational, yet I nor anyone else raced. The park where the meet was to be held was closed. All that could be seen were orange cones lined up across the road, forbidding anyone to enter the park and see what damage lay beyond. 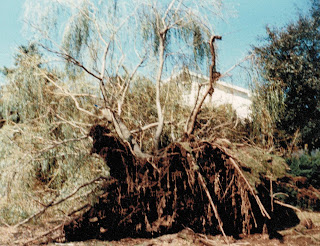 The neighborhood people were busy cleaning up the mess. They were dressed in their worst clothes, baggy jeans, t-shirts and flannel button downs. The people raked the golden leaves of the fall. They used their chain saws to saw fallen trees into little pieces.

The children were out helping move fallen branches. Then they would take a rest and play on the fallen trees, straddling the branches and bounding up and down. The trees would lie still, but their leaves would rustle under the children's weight as if to remind you of their long lives and cruel torturous deaths.

Antennas lay on houses, balanced carefully on rooftops, ready to fall at the slightest touch. Lights lay across the roads. The autumn flowers leaned in toward the murderer. Tress that were left standing were stripped of many branches. Stop lights were not functioning and many electrical lines were down leaving victims in their homes without electricity.

Though the raging storm itself could not be seen, it left its mark in my neighborhood. I ran and ran thinking. I thought of all the great damage left. All the way up the East Coast the storm had raged, leaving many people in the same position. Then I realized in other areas people lost their homes and even their lives. They were not in the same position as my neighbors. We were lucky.

Be safe everyone
Posted by archivesinfo at 6:40 PM