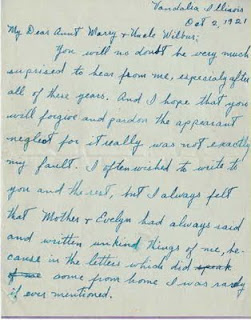 
You will no doubt be very much surprised to hear from me, especially after all of these years. And I hope that you will forgive and pardon the appearant [sic] neglect for it really was not exactly my fault. I often wished to write to you and the rest, but I always felt that Mother & Evelyn had always said and written unkind things of me, because in the letters which did come from home I was rarely if ever mentioned. It sometimes almost breaks my heart to think of the way our home has been broken up. I do not even know where Mother is, and that is one reason why I am writing to you, in hopes that you may know, and will send me her address. I believe that Evelyn knows where she is, but she will not tell me, and says that she does not know. the last that I saw or heard from Mamma was a year ago.....
Then I went to visit Evelyn where I was very much unwelcome, not by her husband who is rather nice but her owing to the fact that I had left most of my things in her care during my stay in Decatur, and she had used most of them and didn't really care to give them up. some of the things she locked away upon my arrival at her home, and claimed that Mother had taken them with her,such as silver ware & tabel [sic] linen and a few other things some of these I found and most of them I did not...


First of all, from this little paragraph I wonder, do you think Aunt Mary and Uncle Wilbur were happy to hear from this apparently long lost relative?

I found this letter among a batch I purchased online as a sort of potluck. Letters like this are sold online and advertised for use in heirloom craft projects. Purchasers are encouraged to cut up the letters and use them for collages. I prefer to purchase them, read them, and lament the fact that they have been separated from their families in this way.

My purchased lot of four letters are from the years 1921-22 and include some details of everyday family life. I know about the family baby. I learn from the letters about the domestic lives of the women in the household. They describe preparing beans and cakes. This is a farming family and the few letters in my possession discuss growing  crops and managing livestock. The letters include lots of names - individuals who are ill, suffering business losses, taking time off. I get just a small sense of this family's life, as if I am allowed to visit each family member for an hour and then asked to go. I will never know these people. They probably don't want me to know them this way. I have a decided picture in my mind of what these people were like, but I formed this opinion about them with very little information

I'm nosy. I want to know more. I want to be asked to stay for a longer visit and get to know these people. I want to learn more about farm life in Iowa in the 1920s. Is there a better way to learn it then through the original letters of farming families who were right in the thick of it all? The collection, that I suppose would give me a full and realistic sense of these people based on the detail of the letters before me, has been destroyed. We will never be able to reassemble the original collection of letters from which these were obviously plucked. The loss of personal papers such as these are a loss for our better understanding of our culture. Our memories of our ancestors also suffer from this loss. Finally, the nosy archivist is left disappointed that the resolution to this family soap opera, for which the letter I quote gives us a glimpse, has been lost to time. These are just clips from life, out of context.

Posted by archivesinfo at 1:50 PM