Lesson Learned. Hopes confirmed. Teens are fascinated by archives.
How could they not be? We should have known this all along!

Last week in this space, I introduced a course I was preparing to teach at the high school where I serve as an information specialist. Over the course of the week, the twelve classes I taught on Introduction to Information began to morph. What started out as a very formally laid out series of ideas melted into a few very big ones. Information is everywhere. We need to pay attention to details. We need to pay attention to what we know versus what we think we know to distinguish truth from fiction - to build our knowledge and to properly educate ourselves.

All freshmen English students took a test on evaluating information during the first half of one of their English periods this week. My lesson on what information REALLY is took place during the second half of the period. My goal was to give them a broad understanding of information and to show them that information does not have to be as dry as a test. I had objects for show and tell that I wove into the presentation. I had a stereoscope, photographs, war ration coupons, a primer. One class, on the second or third day of teaching, had split up. About half the class was still testing while the other half sat patiently in the chair waiting for the lesson. I pulled out the stereoscope. This was not part of the original plan. 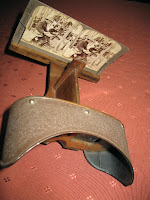 "Let's have a little show and tell before the rest of the class gets here. Has anyone ever seen one of these?" There was an immediate buzz and we began talking about the Viewmasters we had as children. I passed around the stereoscope for the students to get a closer look. The remaining test-takers started to trickle over. "Has anyone ever gotten stickers from their teachers for doing good work in school?" Hands fly up in the air. "Well before there were stickers, students got 'Rewards of merit,' like these. Students valued them so much that they would stick them in scrapbooks. You can see the remnants of the scrapbook on the back of these cards." Pass them around. And so we went on...I had planned to start my presentation with a photo from Ransom Riggs' book, Miss Peregrine's Home for Peculiar Children, but the archival materials proved to be a better warm up.

At the end of this lesson, the 5th one this year, a teacher said something profound to me. It was my second class with this teacher this autumn. I had worked with her rather closely last year designing a research curriculum for ninth graders and I greatly value her teaching expertise. She said, "Melissa, that was your best information presentation yet. You don't need to teach them everything in this lesson. You just need to get them interested."

Parts where I had picked up steam earlier in the week -- evaluating photos, viewing letters and diaries -- those related to archives, stayed in my presentation. Parts where I found I had lost steam were removed. "What does the word 'information' mean? What's an information resource?"

Show and tell led to discussing photographs. I kept Ransom Riggs' images as fodder. Here's an example of one we discussed.
Me: "What do you see here?"
A moment of quiet.
Students: "OHHHH! There's one girl and two reflections! Maybe that's her dead sister! Maybe its her alter ago..."
Me: "Wait. Back up. First tell me what you actually see. One girl. Two reflections. What else?"
Them: "Gravestones... Water... One tall gravestone one short...oh! creepy! the short one isn't reflecting!"
Me: "Ok. Use knowledge you already have. Information in your head...why is the short one not reflecting?"
Blank stares and then someone says, "It's too short."
Me: "How do you know that? AHA! We need to have some understanding of math to know that don't we?"

Nearly every class had the same conversation with the same elements of the photo pointed out to me.

Me: "Now tell me based on your knowledge of the real world, what is happening here? Why are there two reflections?" We talked about double exposure and darkrooms and light sources.
"Now, let's do what Riggs' did and jump out of reality and make up a story. Now we can go back to our ideas about alter egos and dead sisters."

The exercise in which I had them close their eyes to picture a library memory (see last week's post) became close your eyes and picture a place that you love. "Picture an amusement park or a ball game. What sights and sounds and smells were there? Take in the information with all of your senses. Pay attention to details." It's the details that mattered and the information. Not the library setting. One can get a "sense of place" anywhere.

We went through many photos analyzing each. This included Riggs' photos and photos that I had collected at local antique shops. [Search "More Finds at the Local Antique Shop in this blog for samples of my collecting.] Then, I pulled out the diary.

I explained the research that I did with my daughter.
Me: "I found this diary in an antique shop in Massachusetts. I wanted to learn who wrote it."...
"On page 2 it talks about a train crash near Wells and Kennebunk. Where do you think this diary was written? [silence] What state?"
Students: "MAINE!"
Me: "I don't know why, but the author wrote first and last names of friends. I don't know about you, but when I write in my diary I write first names only. Maybe first and last names was common diary writing then. I could research that if I wanted to, but that's not the direction I wanted to head. How can I find out more about these people with their first and last names as information at my fingertips?"
Students: "GOOGLE IT!"
Me: "Yep, that's what I did and on books.google.com, I found their names in a book called "Businessmen of Maine....Do you know about books.google.com?...that's all I found on the Internet. Where should I go now?"
Students: [some confusion and then usually a tentative...] "Go to Maine?"
Me: "YES! Where am I going in Maine?"
Students: "To the library!"
Me: "What library?...what am I looking up at the library?" and so I revealed the clues. Then I revealed a dead end. I knew all about the people and places surrounding my diarist, but I didn't know my diarist so I re-read the diary. A clue that I had originally ignored stuck out. I told the students that the diarist mentioned a marriage on a particular date, but I had ignored it because it was mentioned so matter-of-factly that I thought I misunderstood. This time through, I decided to pursue it as if the person was really married on that date. Sometimes we don't see what's right in front of us. Instead of throwing up our hands and saying "There's no information!" sometimes we need to slow down and re-evaluate.
Me:"Where do I go to find out about marriages?"
Student smirking: "The Internet!"
Me smirking back: "NO! Where do I go? (quiet) If your parents were married, what document says that they were married?"
Student tentatively: "A Marriage certificate."

Early in the presentation, I showed students places I had worked to shatter their ideas about what the "information sciences" entails. I have had such a varied and unusual career that when I was putting together my presentation this seemed like a worthwhile thing to highlight. However, my discussion of my own career became more important with this line of thought. I had shown students a picture of a town hall vault and explained that important town records were kept there.

Student: "You would go to town hall to find a marriage certificate..."

The pieces came together. They were getting the idea about following an information trail. I revealed who my diary writer was and showed pictures of him, his house, his business, his marriage record. I showed an advertisement for his business and the plot map for his grave.

After one class, a teacher told me that a student had leaned over to her to whisper that the fact that I had visited his grave was really cool.

At the end, we talked about different ways of learning and creating a makerspace in our library. We talked about behavioral expectations. We talked about books. They were paying attention. I felt like I was getting to know them as a class. (I am excited about the school year now!)

Moral: Wherever you are evaluating information, the rules of slowing down and thinking about what is going on applies. I think this is the most important thing my students learned from me this week. Information is everywhere and we need to pay attention to appreciate it. Oh yeah, and archives are cool!

The ins and outs of finding out more will come throughout their high school careers.

If any students are reading this, thanks for a great week! I look forward to learning more with you. Thanks for teaching ME about what is important.

Posted by archivesinfo at 9:01 AM