What Does "Community" Mean in the 21st Century? Why is it important?

Last week, I Asked on Twitter, Facebook, and Google+: "What is community? Where do you find it? Is the idea of community changing?" This post explores what community means in the 21st century and why it is still important. 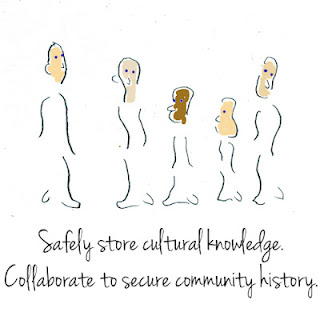 As someone who specializes in helping local communities, I use that word - "community" - quite a bit. I realize that it is hard to define, a bit squirmy, and loosely tossed around. So after my friends at the "Library as Incubator Project" sent me their guest post article on Serving Artists in Your Community last week, I began to try to nail that word down again by getting input from others on its definition. I thought that perhaps the idea of community is changing and that it means different things to different people. While these thoughts were confirmed, I was also surprised by how some others interpret that word.

The ideal of "serving the community" is something I think that all cultural heritage institutions can ascribe to. I have long believed that the prime purpose of archives, libraries, and museums is to document and support communities. In order to claim such a lofty goal for all of our work, the term needs to better understood. Defining "community," would in part show how our audiences overlap and how we can better work together to serve a common purpose.

Preparing early in the week for the "Library as Incubator Project" post had me thinking about the idea of a general audience for museums, libraries and archives. The specific focus of the Project's work from the perspective of librarians got me thinking about whether or not archivists could create similar tools and outreach efforts to focus on a particular "community." Can archivists, curators and librarians share communities and offer different services that target the same audience, perhaps even in a collaborative way? Are we all serving the same "community"? Are we even all part of the same "community"? Is the idea of "community" changing in a way that can enhance our efforts to reach out to our public audience?

Here's the definition of "community" that I offered in my blog post on the subject last year. It is in fact still the post for which I consistently get the most hits on my blog site:
"A community is a formal or informal group with a common history or culture. The community can be based around a geographic area, trait, or topic of interest. Communities come in the form of:

To me, "community" is a noun representing people. It matches this idea presented by a Twitter friend:
"[Community is] A supportive/interactive membership of individuals with a common interest - tho[ugh they] may possess a different outlook/set of goals."
I was surprised by some other people's responses though. Not everyone defined a "community" in people terms. Not everyone defined "community" as a noun. And some people even saw it as a negative thing rather than a positive one. Here are some alternate definitions that were shared:


On Twitter, someone responded: "Community is the act of sharing, kindness, collaboration, support & combining resources." I responded to the person who wrote that, that I had not thought of  community it as a verb. The writer wrote back to me: "... Community involves participation, therefore it is an action." Okay. Great. I think I like the general thought behind that idea.

Community as a Feeling


Facebook allows for more detailed responses. Some one wrote, "Community to me is a sense of belonging. The first communities for many of us were those within a family and grew to include our neighborhood, school, or community. As our physical boundaries grew, so did our sense of community -- such as identifying with a specific region, or state, or nation. But as we grow and age, I think it evolves into many differing layers which are by choice and not happenstance - those kindred spirits which become a community - those sharing common ideals or interests. Those first layers of community may stay, evolve, or dissipate."


I like the idea of community as a feeling, more than just as people. It makes sense to me that collections can help foster that feeling and the differing "layers" the writer describes by shedding light on overlapping communities.


Another person on Facebook poetically described the erosion of "community" and the idea that we were losing that sense of belonging and losing that idea of comfort and kindness. I wonder, can promoting libraries, archives and museums, as "community" hot-spots that serve to retain the ideal of collaboration and shared knowledge help re-boost the sense of security that people like the writer may find slipping away in a faster paced society?


Community as Place
One person didn't see "community" relating to people at all, but saw it as inherent in buildings. "community is buildings with memories. Community is where I grew up and where I remain active now…." I asked for clarification and received this response: "[Community is] buildings who have seen some years- where people say 'if these walls could talks.' [They] can be beautiful or ugly but have stories." I asked for more clarification. I asked if buildings embody communities that go back many generations and the writer responded: “often times yes. Not all buildings do though. A church or community hall, yes. But a 1970s roller rink can sometimes but not always. A church for sure, but a 1990s roller rink can have memories of a community too….i think bldngs can be the most concrete part of a memory. May not remember exactly what happened but people remember bldngs."


I think that this point of view would certainly serve to show the importance of cultural heritage institutions serving as community building blocks, but rather than the collections serving the purpose alone, the edifice in which the collections are housed are just as important. I think the idea of the geographical locations or neighborhoods that I included in my bulleted list of communities fits in with this idea.

Community as a Romantic Construct


Another person responded "Community is hard to define, yet historians use it to understand the way people lived. It is mostly a romantic construct… Any negative memories are lost in the retelling over time."

I'd like to think that positive and negative build communities and it is not all romanticized. Yet, another person responded that the idea of "community" could be an old-fashioned one where people believed in safe spaces and perfect neighborhoods for all, even though they never really existed.

Community Representing Class Distinctions
Along these lines, my U.K. friends on Twitter pointed out that overseas " 'community' started out in 80s as euphemism for housing estate, working class, black..usage widened..but still mealy mouthed…" In response, I pointed out that the word "community" is centuries old and hasn't always meant that. The writer responded: "indeed, i was thiking of its more recent currency in culture and politics..slippy, slidey,elisions of meaning."


This was a new idea to me and a way of using the term that I don't think we use in the United States. It brought home the point that community is a "squirmy" word and not necessarily a positive one to everybody.


The definition that I think I like best is the last that I saw. It was not directed at my question, but I saw it on Twitter under #musesocial, which was considering the idea of serving community from its own angle last week: "Perhaps "community" is not group of people so much as safe space for nurturing dialogue/participation."


Along these lines, I would like to emphasize that is what cultural heritage institutions do best, or what they have the potential to do best if they accept that niche, is nurture dialogue and civic participation. By recognizing a common audience and like-minded goals across instiuttions, perhaps we can together use the term "community" to foster our sense of purpose, to promote knowledge in many forms, and to provide that "secure" space for public engagement.
***
Do these ideas of community resonate with you? What else would you add? How do you see the idea of community serving cultural heritage, organized human knowledge, and society in general?

Posted by archivesinfo at 3:24 PM