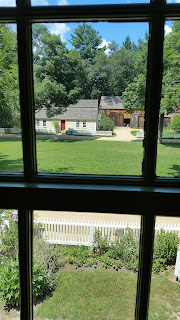 This week, I took my daughter and her friend to Old Sturbridge Village in Massachusetts. The Village is the largest living history museum in New England on over 200 acres of land. It recreates an 1830s New England community with over 40 structures that include a general store, mills, homes, barns,  workshops, a school,  and more. The girls accompanying me were twelve-years of age and are about to dive into American History this fall as seventh graders. Our little trip gave them a taste of some of what they will learn, but the main lesson for my daughter surprised me.

The girls were disappointed with the beds of straw, but were enamored with the cozy wallpapered bedrooms. The cramped quarters in the stagecoach made us appreciate my car even more. They liked some of the outfits, but were glad that they did not have to wear them on a hot date. They enjoyed the games, but were not happy that they would be spending so much time at the age of twelve doing chores instead of playing. 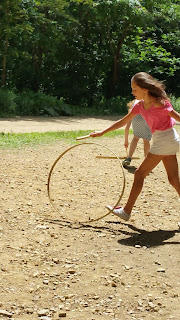 Early in the visit, my daughter asked if she could have been artist during this time. I explained that art was a profession for very, very few and those few would not be from a village like this. If you lived in a city you may be exposed to art as she knows it, but not really on a rural farm. You would not be able to afford art supplies. You would not have had the time to practice drawing. And so, my daughter's thoughts turned to, "What profession could I have had in the 1830s?"

I have talked to my daughter about how much life changed for women in the 20th century. I told her about how when I was a kid, I was told that I could not run a steeplechase race that I really wanted to compete in because I was not a boy. I told her how much it annoyed me that our physics teacher often made points about physics by throwing baseballs to the boys in the class and not the girls. I told her about how grandma was turned away from her school entrance because she wore pants on a snowy day, even though she had a skirt in her bag for changing in the bathroom. But these are stories. These were my stories. Sturbridge Village helped us turn these stories into part of my daughter's own narrative when she was better able to apply what I've told her to herself. 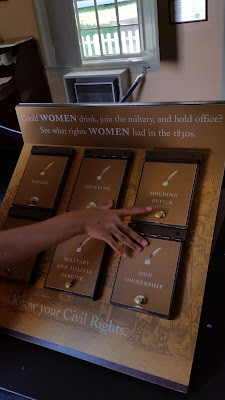 The female interpreters in Sturbridge were sewing, caring for animals, baking and caring for the gardens. My daughter, who is an avid writer, wanted to visit the print shop. The girls hung back and I asked a lot of questions (trying to be a good role model.) "How did they make paper?... What was the ink made out of?" As we left, my daughter asked me if women could do that work. "I don't know" (Yes, I did.) "Let's go back and ask."
Her face grew grim at the negative response we received from the interpreter. Women may have done a little typesetting to supplement the family income, but that would have been rare and it would not have truly been a job. Women worked in the home.

My daughter walked through the houses with new eyes. Early in our trip, she mentioned how she liked the parlors and that she would spend most of her time there drawing. Now, she looked at the kitchens. She had no interest in the rooms for sitting and sewing. "I could spend my time in the kitchen. This room is open. I think I could do my chores here [and be comfortable and happy.] 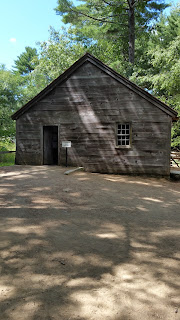 When the girls saw the school house, they decided to be teachers.  "We could have done this!" they yelled as they ran toward the door. "You can pretend your the teacher now. I'll be the student." "I'll teach you spanish!"

The schoolhouse was actually moved from a town near us in New Hampshire, so I mentioned that fact hoping it would help the girls even better place themselves in the past. They ran into the building and were greeted by an interpreter who was standing at the teacher's podium. We took seats on the benches. Asking questions, we learned that the kids of Sturbridge attended school in summer and winter. They learned on their own at their own pace, from their own books. The teacher tested them on their lessons, but did not "teach" as we know it today. Teachers were young people who probably had just finished their own schooling. Adults did not teach. Young ladies would have taught in the summertime, if they had the opportunity to do so. They may have taught one summer session and that would be it. Teaching was not a "career."

Our visit to Sturbridge made the experience of nineteenth century American life come to life for the girls. My daughter in particular will never see her place in the world quite the same way again. Furthermore, this fall the kids will be able to look back on our trip to give them better context and understanding for all of their American History lessons. I think now they will be able to imagine themselves in the full narrative of our country's roots and with an understanding that as girls, their opportunities would have been greatly limited from the full scope of what they learn.
Posted by archivesinfo at 7:20 AM No comments:


In last year's Top Ten Cultural Heritage Stories, I highlighted the woes we are suffering due to outdated law and perverted interpretation. (See list item 5.) The crisis rears its head again, coming to my attention this week with a story about a photographer. It begins as wonderful story about a hidden talent discovered after the death of the artist. I offer you highlights from what I've read thus far as a base to consider some of the issues that must be resolved with copyright law as it now stands.

Imagine this : perhaps the most important street photographer of the twentieth century was a nanny who kept everything to herself. Nobody had ever seen her work and she was a complete unknown until the time of her death. For decades Vivian’s work hid in the shadows until decades later (in 2007), historical hobbyist John Maloof bought a box full of never developed negatives at a local auction for $380. [Upshout]

I was intrigued. So I did a quick Google search to learn more. I learned that Maloof's interest in the work and life of the nanny photographer grew and he began doing some research.

Thanks to one of the families that Vivian nannied for in Chicago for seventeen years, John was able to acquire items in her two (packed) storage lockers of personal belongings that were going to be thrown in the garbage. Most of what was stuffed in these two units was a giant collection of various found objects such as crushed paint cans, railroad spikes and other tchotchkes, but sandwiched between the clutter, were hundreds of rolls of color film and fresh clues that would take the research into new directions. [Maier web site]

As an archivist, I was impressed by how a collection of Maier's work grew, with Maloof finding personal papers mixed in with the clutter. These papers led him to people who knew Maier from whom he pieced together a fuller picture of her life and her photography work. This work awakens the streets of mid-twentieth Chicago for the 21st century viewer.

[Maloof] spent years tending and promoting [Maier's] work through commercial galleries, museum exhibitions, books and a recent documentary, “Finding Vivian Maier,” that he helped direct. Mr. Maloof hired genealogists to find heirs to Maier in France and eventually paid an undisclosed amount for the rights to her work to a man named Sylvain Jaussaud, whom experts identified as her closest relative, a first cousin once removed.

This work seemed to be a labor of love, but I'm sure it was also lucrative with books written, exhibits held, and attention gathered. This is where the story takes a turn from something that seemed culturally worthwhile to something people began to question:


According to the New York Times an attorney named David Deal claimed that the "situation bothered him so he decided to do some research.  "[He] hired his own genealogists and last year traveled to Gap, an alpine town in southeastern France, home of Francis Baille, a retired civil servant whom he believes to be another first cousin once removed.

Mr. Baille, who had no idea he was related to Maier, agreed with Mr. Deal to seek to be recognized as her heir under American law. Reached on Friday by phone in France, Mr. Baille said, 'For now, I just do not want to talk about this.' But his French lawyer, Denis Compigne, said: 'It’s an extraordinary situation. You can imagine what it’s like to get a telephone call about someone who died that he never knew, with this precious legacy. He is very, very surprised.'

The legal case to determine whether Mr. Baille is Maier’s closest relative has now set in motion a process that Chicago officials say could take years and could result in Maier’s works’ being pulled from gallery inventories and museum shows until a determination is made.

Many people have risen up to add their objections, to cite their own interests, to use Maier's photos in their own work, and to try to untangle the story of Vivian Maier and her archives.

Some considerations:
- What is the true purpose of copyright?
- How can this law protect the right of creators while encouraging creativity and progress in future generations?
- How are we inspired by others' work and when do we cross the line into infringing on others' legitimate interests?
- Is there one "right" answer?
- Is there a way to resolve copyright disputes more swiftly for the public interest, to keep up any momentum of innovation when it is needed?
"Copyright is such a convoluted arena, I don't think anyone really understands it." [The Heart of the Vivian Maier Project.]