More Finds at the Local Antique Shop - The Appeal of Photographs

Last week I set out to browse the shops on Route 4 in New Hampshire, known in these parts as "antique alley." Despite currently being enrolled in an antiques class that has me examining artifacts such as pottery and toys, I found myself once again fully engrossed with my beloved archives and ephemera. These items that I can pick up for two or three dollars on a good day reach out to me to tell me the stories of ordinary people in a way few other items can. Images that hold value to me are those that show something removed from my way of life.

On my Facebook page, a remark a number of months ago has had me thinking about what makes photographs so appealing to people. I replied to the comment, "I think photos make history come alive in a way that other types of archives (except moving images) cannot. We can better understand the past ...dress and environment. We can also directly look into someone's eyes and try to feel what they were feeling. Whereas with old documents we may have the thoughts of a person in writing, in a photo we can project our own thoughts and picture ourselves in a different time and place in their costume. The past is brought more to life in an image perhaps. We don't have to create the scene in our head. It is right before us." The images I draw from today have piqued my historical interest and imagination. Something otherwise plain and ordinary seems far removed from what I know, so I romanticize it or turn it into something of value. The value to me is twisted based on my lifetime experiences and professional knowledge, but also based on my own heritage in comparison.

I recently read an article written be an English woman interning at the Smithsonian. She described her love for American history being due to the foreignness of it, romanticizing the United States' short history and the unique pride we have in it. She compares the traditions and attitudes in this country against those with which she grew up. Our "otherness" has in her mind intensified the value of the history she studies and the work experience she is having.

This idea also brings me back to a conversation with a colleague last week. She is from this area of New England and I am originally from New York. She was raised in an old New England family with a Protestant background and I am from a Jewish immigrant family. We have been working on a program about telling life stories, so have come to learn a lot about one another's heritage. She basically told me that her family history is boring unlike mine, which involves my family escaping from the Holocaust during WWII. I told her that I find her history exciting and that is why I moved to New England. My history has a moment of adventure (for lack of a better word), but the true story of my ancestors is rooted in orthodoxy and a religious life that was practiced for generations without any other blips. The foreignness attracts me to New England (despite living here for 23 years now) and attracts my colleague to New York.

The images I found at the antique shop la 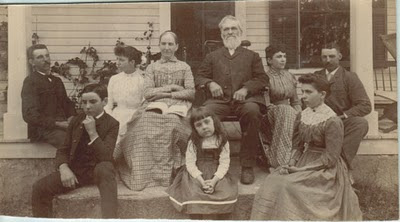 st week are of ordinary people. I think it is safe to say that I would not want to really live in the shoes of any of these people. I don't want to wear their uncomfortable clothes. I have never wanted a big family. I don't want to run around in overalls with dirty feet. I like the amenities of 21st century America. However, each of these images is appealing, showing a romanticized version of time and place -- romanticized in part by the photographers of the images, but also by me and my own biases.

In the first image, the man of the household sits higher and central to his large family. His wife is by his side with a book open on her lap. I imagine that it is a bible. The children are well dressed and neat, sitting on the stoop of the family home. They cannot smile. Presumably if they do try smile, they will not be able to hold the pose long enough for the camera to capture the scene without a blur. If I look closely, they are quite stiff, in suits and corsets of the time. They are also stiff in pose, facing away from each other each lost in their own thoughts. It seems a strange way for a photographer to pose them to me. At first glance I saw the great American family. With a second glance I feel an underlying current of uneasiness. Is this a romantic scene of happiness, pride and comfort? Only the little girl looks directly at us. Even the father who faces us seems to be looking over my shoulder and the mother doesn't look directly at us, sitting with her arms folded across her belly as if she has a stomachache. This is certainly not the life I know, but I'm also not sure what these people are really feeling. I am projecting my own thoughts on this confusing scene. 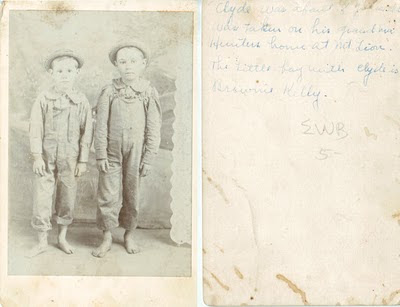 The second picture reminds me of a Mark Twain tale. Boys just like Huck Finn and Tom Sawyer stand side by side with dirty feet and mussed overalls. This is the way Americans romanticize times past with a "boys will be boys" sensibility of children playing in mud puddles and catching frogs. We are lucky enough for the image to be labeled on the back. "Clyde was about 8 years old. Was taken on his grandma Hunters home at Mil Lion. The little boy with Clyde is Brownie Kelly." The boys even have great American names! But is this an image of a beautific childhood or of a hard farm life? 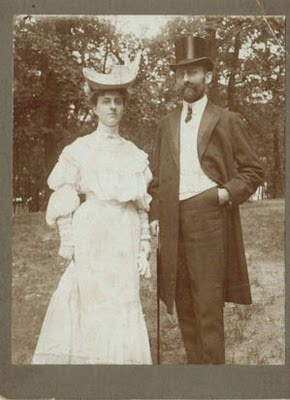 The third picture I found of Americans is of a presumably well to do couple. The photographer shoots up at them, emphasizing their fine dress and perhaps even their high station in life. They are the picture perfect people from the gentleman's top hat to his hand in his pocket to the woman's fine gloves and coif. Perhaps this couple is attending a wedding. If I were living during this time, I probably would want to be them. I envision nineteenth century yuppies with few responsibilities they can't handle. I don't think I want to see their correspondence, diaries, or financial papers that may ruin my ruminations about their lovely existence.

A photograph's appeal is in its capture of fleeting time. A moment is locked for eternity and an ethereal being lost to the pages of that time can be a tangible image on paper and in our mind's eye. Photographs alter our perception of reality, reminding us that our experiences are not the center of the universe and showing us that diversity can be mysterious, confusing and wonderful. I wonder how people will view my boring 1970s polaroids if they are ever separated from my family. Will my little boring suburban Long Island life be exciting to someone? What will they read into my skinny body and perpetually perturbed pre-teen stare?
Posted by archivesinfo at 8:24 AM