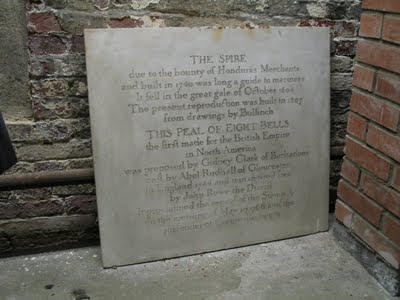 Recently I visited the crypt at the old North Church in Boston. It is a fascinating, hallowed place where hundreds of Bostonians are interred. Resurrecting a Storied Past is a good short video showing the inside of the tomb and describing research that is being done to preserve the history of the space and the individuals who are buried there. One particular item caught my eye as I explored. Propped against the wall was this marker for the spire and church bells that reads, "...This peal of eight bells the first made for the British Empire in North America was proposed by Gidney Clark of Barbadoes cast by Abel Rudhall of Gloucester in England in 1744 and transported free by John Roe the Diarist..." I wondered about John Roe and why it was significant to mention that he was a "diarist."

In a paper read before the Massachusetts Historical Society and published in 1895, Edward L. Pierce discussed the value of the Rowe diary. He states,

The other printed diaries [among the MA Historical Society holdings] cover a briefer period than Rowe's; and their authors, or most of them, have a standpoint different from his. Several of them, like Rowe, have much to say of the weather; but that part of his record is omitted in this summary. Rowe himself, without being an acute observer of men and events, was an intelligent merchant ; and while we could wish he had reserved a part of the space which he gave to the ever-recurring names of persons whom lie met at dinners and clubs for a record of the opinions they expressed, still there remains much which illustrates the public and social life of Boston at this eventful period.

In 1903. the letters and diary of Rowe were published by his great-great niece. She stated that she wanted the published for reasons of preservation. So that her ancestor's words would "be put beyond the possibility of loss." The high value placed on these materials is notable to me. We recognized the rarity of the item in its age, its unusual point of view, and its value in displaying "public and social life" during an eventful period. The introduction to the diary provides wonderful context for this wealthy merchant's life. His writing, as well as our long-term study and appreciation of it, is a fabulous example of the value of personal archives.

Posted by archivesinfo at 8:57 AM