Runners took to the streets of Manchester, New Hampshire today to do a little run through history. Runner's Alley, a popular store in my area for all things run related, organized the event around the hobby of one of its employees. When taking locals for training, he would begin to talk about this town in which he grew up. I overheard one runner this morning who said, "It's nice because he did all the talking on our group runs. We just ran and didn't have to say a thing." As a life-time runner myself. I was intrigued by the idea of running from place to place and stopping to hear a little history, combining two of my passions. I was not disappointed. My knowledge of the area was boosted with a little local color, personal stories, and reminiscences. I began to think about how this concept could be applied to teaching and to boosting interest in cultural heritage institutions. 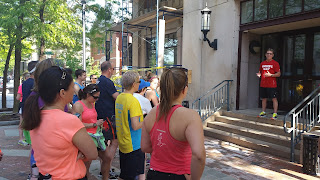 We started on the steps of City Hall. Our large group of runners were engaged from the start and immediately started to ask questions. 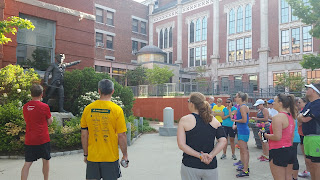 We talked about the age of our city and settlers. Our famous Revolutionary General, was a central part of our running route. Stark's words, "Live free or die: Death is not the worst of evils," were the inspiration for our state motto. 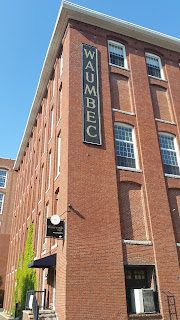 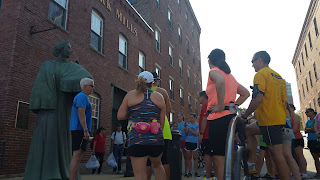 As a former archivist in the city of Waltham, Massachusetts, I was excited to learn a bit more about the mills of Manchester, built by those who had moved up the river away from the birthplace of the American Industrial Revolution...From the mill girls to the canals to trains to the mill owners to the work of making cloth, the stories are embedded in the re-purposed buildings and grounds we saw today. I think all mill towns should consider running tours to boost local pride and tourism. Their set up is perfect for such tours. (Hear me Waltham?) 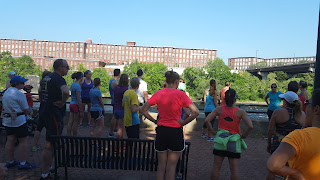 I was brought to overlooks I had never seen, though I've lived here for 18 years. The Merrimack River, which so many take for granted, has a rich history and tucked away spots with hidden stories. It was nice to stop and consider with the group how the river helped mold our home. I learned that we were following a route of a heritage trail in Manchester. Despite my interest in history and my professional background, I had no idea that there was a heritage trail here. 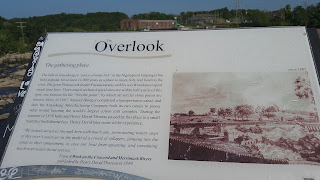 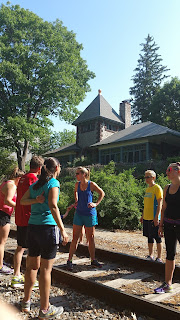 We stopped at a former rail station, called "Governor's station" that was built for a powerful man who wanted a station convenient for him. It is now a home tucked below the end of a dead end street, right along the railroad track, which is still here today. I never would have ventured here on my own, despite my curious nature that often takes me off the beaten track. 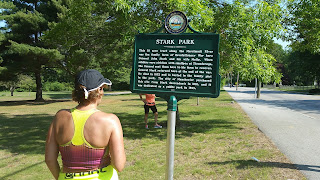 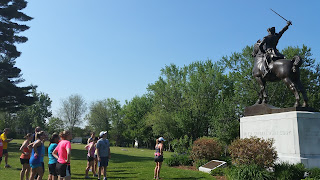 Our run took us to Stark Park. Where we again admired the foundation that this war hero laid for our state and country. 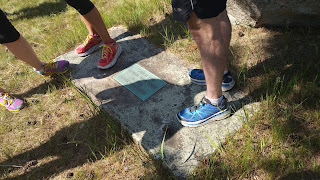 I liked the contrast of the running shoes on what remained of the Stark homestead.I enjoyed thinking about the very different shoes our forebearers must have worn when they stepped on this exact spot. 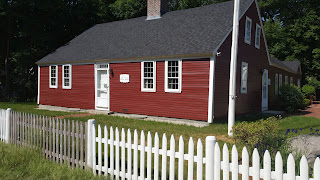 I ended my tour at the John Stark house that was purportedly saved by the DAR in the 1960s. My running tour group continued on to the library and Victory park where they were going to explore a more modern history. The part of the tour in which I participated covered 5 miles in about an hour-and-a-half, with frequent stopping to discuss the sites and a much desirable water break on this hot day. People of many different abilities and ages joined us. The youngest was in a stroller. The youngest runner was about ten-years-old and the oldest runners were in their 60s.

I am hoping to develop a similar run for the running club at my school in our own town. I think this is a great way to interest  teens in history outside of the classroom. A bicycle tour, scooter ride, or another fun means of getting place-to-place can help kids focus and participate in something that works their mind and body. I have been to history open houses that involve driving or bus tours throughout a town. Why not sponsor a person-powered tour? Museum, archives and libraries, team up with your local running store or running association. Offer runners water while they learn about your institution. Give runners a pouch for their run where they can tuck goodies such as a history passport book, keychains and pens. Better yet, offer running items such as water bottles with your organization's name, headbands, etc. Be creative. Have a library card sign up in front of your building so each runner, biker or person on a scooter can leave with a card if they don't already have one. Give free passes to the inside of your institution so when the group is showered, they can come back to explore your facility more deeply.

This is one more way for cultural heritage organizations to expand our audience.


Posted by archivesinfo at 8:28 PM