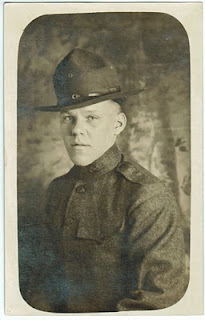 Soldiers jump out at me when browsing through orphan photo collections in antique shops. Coveted by many collectors, the soldiers stand as representatives of events that we automatically recognize as historically significant. Their faces seem haunted by the context of their story. The photos that I usually find like this in a shop have nothing indicating the subject of, or the story behind, the picture. This one did and that is what attracted me to it: 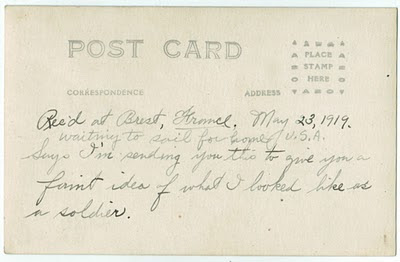 The first thing I noticed was the slight silvering of the image. It has likely been kept next to an acidic piece of paper (perhaps an envelope?) in an inadequate environment for many years. Proper boxing and climate controls will slow down that deterioration.

I next noticed how young the soldier looks. I realized that I was placing this man in the context of my own life, when many people are starting to look "young" to me. In reality, the people who survived this war were about 70 years older than I. History is a funny thing in that one tends to transport oneself to the time one is contemplating. Portraits drive home the point that the person who looks back at us through the picture could have been someone we knew, if we were just born during another time. The people from history are not all that different from us.

World War I ended in November 1918. This image has the date May 1919. I therefore know that this soldier survived. He talks about what he "looked like as a soldier." He is through with his service. Some of the "haunted" feeling I got from a first glimpse at the gentleman's face is gone. I now feel relief.

I wonder why he sent this home to the U.S. and to whom. The postcard is not dated or stamped. Can I assume he sent it in an envelope? Was the writing on the back of the image written by him or copied from a letter by the recipient. The use of the word that I think is "Says" seems to indicate that maybe this was copied. Are the people to whom he is writing waiting for him overseas? Was he unable to write to them and send a photo during the war for some reason? He had his whole life ahead of him. What was he planning? As he wrote these words, was he too thinking about his service ending and wondering what came next - he looking forward and me looking back?
***
The last U.S. veteran of World War One died about a month ago.   Archives are working hard to preserve the legacy of the Great War. It becomes harder to preserve memories once the people who lived through the stories are gone.
Europeana, a collaborative project that gives access to Europe's cultural heritage, recently put out a call asking for help with World War One records:
Crowdsourcing history: European museums need your help to digitise World War One records is one example of ways professionals and non-professionals can work together to save our heritage. This project and similar ones in repositories around the world are part of the important work that cultural heritage professionals do to ensure that history is not forgotten.
Posted by archivesinfo at 11:48 AM