The Stuff of Myths and Legends 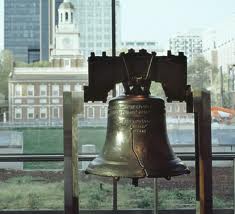 What kind of object can stand as a symbol of a group's identity? How do these items become imbued with meaning? What purpose does revering an object hold for a society?
***

I highly recommend Gary B. Nash's "The Liberty Bell," which does a fine job of describing the history of an object from its creation through its epic rise to become one of the best-loved symbols in the United States. The tale of the "Liberty Bell" grew to mythic proportions when individuals chose it as symbol of freedom to be used for their political causes. Created as a state house bell for the colony of Pennsylvania in the mid-1700s, the bell we now know as "The Liberty Bell" was offered varying degrees of attention in its early life. Often shoved in a corner and at least once almost trashed, the Liberty Bell was just another object of times past until the late 1830s when abolitionists began to use it as an emblem against slavery. They cited its inscription "Proclaim Liberty throughout all the land" to try to make citizens see a dichotomy in their actions and words. Abolitionists brought the bell new attention and new purpose.

The parts of the Liberty Bell story that rank among the most interesting to an archivist are tales that arose about the bell's place in history that can not be backed by primary sources, but appear suddenly in secondary accounts:


Once one group recognized the Bell as a possible icon for their cause, proclaimed the value of the item, and successfully spun a tale about its history, other groups followed suit. The bell has been used to promote such causes as women's rights, freedom for working children, and Americanization of Asian immigrants. It has become part of a "civic religion" that promotes certain accepted national mores most closely associated with freedom and national pride.
In reality, it is nothing but a rough and cracked old bell, nothing like as large or handsome as hundreds of others throughout the country. Yet to every intelligent and patriotic American it is worth infinitely more than all the rest. They would fight for it. If necessary they would go to war to protect it or to rescue it from an invader...Why? Because it represents a sentiment and an idea that Americans would die for. The American imagination has invested it with a dignity that makes it sacred and with something like a personality that endears it to every man, woman, and child who knows history. [quoted by Nash from Mires who quoted it from a late 19th century newspaper]
While some items stand as symbols from the moment of their creation and were often created with this iconical purpose in mind (ex. The Declaration of Independence,) other items are imbued with a meaning that was just not there from the beginning. The Bell had a practical function and was laid aside once it served its purpose. Individuals tend to romanticize the past and can look back into their history to seek new symbols from old artifacts to represent ideology they hold dear. We can easily imbue items with meaning that is not there. There is good and bad to this. Revering an object can draw people together. When we can agree on common values, our objects can proclaim the beliefs of our communities for us and bind us closer as a society. However, individuals must be able to distinguish myths from reality. We must be capable of using our original sources to identify the facts, allowing the legends to work only as fairy tales that can help us make a point without tying us to untruths.
Posted by archivesinfo at 3:11 PM