More Finds at the Local Antique Shop: The Profile Image in Context 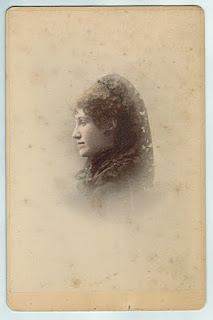 While at the antique shop today, I found a few lovely profile images of women from the turn of the century. This is a pose that we rarely see in portraiture today and I began wondering about the history of it. I found Patricia Simon's fascinating web site with excerpts from her article "Women in Frames" that offers an interesting theory about the origin of women in this pose. Prior to the Renaissance, according to Simon, profile portraiture was reserved for men. Perhaps, I think because prior to this time, few women were considered to be important enough to have their visage preserved in high art (or any other art for that matter.) A few articles I've read have said that the profile grew out of classical imagery, as seen on Roman coins.  Men with prominent noses and strong jawlines, by the mid-15th century, were replaced by women in profile. 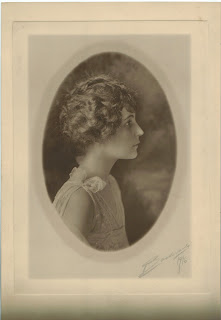 And here is where it gets most interesting for me...Simon theorizes that this format enhanced the idea of women as objects of beauty. They were shown with accepted modesty, including eyes looking away from the viewer and sometimes downcast. Simon claims that this pose also allowed Renaissance women to show off their finery without abashment, showing them as fine representatives of high culture and role models for their sex. This style was used to the same effect in the Victorian era, but can you picture Isabella Stewart Gardner accepting that kind of treatment? Consider the way she stares at you in her well-known painted image by John Singer Sargent -- almost daring you to make a comment about her femininity that she so proudly displays with her plunging neckline and tight bodice. This dichotomy in imagery reveals the struggle for women to gain equal footing with men. This is  evidenced in their historical fight for suffrage and equal rights, which  rose to prominence in the late nineteenth and early twentieth centuries, when my two antique shop portraits were taken.
By the time the camera came around, it seems that the profile was just one of the standard poses in a photographer's arsenal. In addition to the profile, I found a frontal view of the woman in lace. Yet the profile pose of the woman (and also of the girl below) are particularly striking. They appear almost porcelain-like. Their fine features are emphasized by this view from the side that also shows off the classic curls in their hair. They are virtuous female Victorians, perhaps stereotyped as such in these images.
I wonder why profiles are not popular today, but I have a theory. When someone happens to capture my image in profile, I tend to dislike it. I do not picture myself as my profile. I want to stare at the world head on. I want the viewer to recognize me and to see into my eyes. I want to appear strong and friendly. I do not want to be shrinking, lost or untouchable - like porcelain. Has modernity chased away a women's soft decorum and is this represented in our imagery? Profile images invite us to consider the context in which they were taken. Twenty first century images represent and document the modern woman and not the ideal woman of more than a century ago. Images such as these can give us remarkable insight into changes in our society and even a pose can tell us quite a bit.
Posted by archivesinfo at 8:16 PM