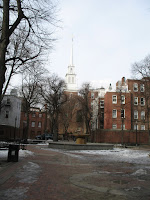 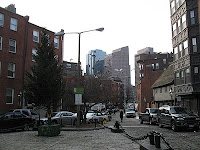 This past Friday, I braved the New England cold for a three hour walking tour of the North End of Boston and found that the quiet winter streets were ideal for wandering through the City. Context Boston offered me the tour to get my take on their recently launched historical seminars.

My e-mail contact described Context Boston as "a network of over 200 scholars and experts who create and lead walking seminars in cultural capitals in Europe and, now, the United States as an alternative to mass tours. Context connects intellectually curious travelers (and locals) with Ph.D. level experts for in-depth learning experiences..."

Perhaps I should not admit this, but I am not a tour guide kind of cultural heritage participant. I prefer experiencing a site on my own, doing my research ahead of time, carrying my guide book or brochure, and wandering through an institution or new city. I like going in blind, being led by serendipity and not another person with preconceived notions about what I should find interesting or a docent who tells me what parts of a history are the important parts. In other words, I am quite often the person in the back of the tour group who is reading my guide book while the group leader is speaking. (That's the part that I shouldn't admit, I think.) I thought that Context Boston might have their hands full with me, but I went in with an open-mind, choosing the walking tour of the North End over three others offered because of the area's immigrant history. As a former archivist of the immigrant City of Waltham, Massachusetts, I thought I'd be able to make some good connections in my knowledge of the subject. I had been to the North End many times as a former resident of Boston and a frequent visitor, but I was not well-versed in this particular area's community history.

Boston's North End is now known as a neighborhood composed mainly of people of Italian descent. Its contemporary standing in my mind focused on its restaurants, ethnic shops, and culinary festivals. Its history was remarkable to me for Copp's Hill Burial Ground, which is one of the oldest graveyards in the city and of particular interest to me because of my research in this area as a student, and of course for Paul Revere and his ride. The North End has a small, old-fashioned community feeling in a large city. I had invited a colleague to take the tour with me and she said that the area made her think of Brooklyn, New York. I think that is an apt comparison.  Despite this cozy sense on old narrow streets where neighbors can probably still yell across to each other from apartment to apartment (much like the stereotypical Prince spaghetti commercial from the 1970s), I always feel like an outsider when I venture through this area. I am not privy to the true character and inner happenings of the community as a wanderer on its streets, but our tour guide had the insider's view as a resident of the area, president of the recently established North End Historical Society, and writer of a book about the area's history.

The value of the Context Boston tour to me was this insider's view and the easy knowledge our resident expert had. He could not be stumped by any question (and I did try to stump him.) The very little he did not know, he would admit to and give us some other related tidbit that tied perfectly in to my questions. The guide could change directions on the fly. He tailored his tour to our interests, at first giving us some basic information and then ratcheting up the depth of his colorful descriptions when he realized that we had some historical knowledge of the area. The information he provided us ran the gamut from the 1600s to the present day and included multiple ethnic groups, who I pictured arriving on these shores pushed by the waves of the Atlantic. We talked about architecture, religion, city planning, business, and every other topic that relates to the development of a community. There was no script for our guide. He asked what we wanted to view (everything) and what we wanted to know (everything). He led the way, making sure to get in the necessary history to give us a good framework for understanding the subject, but also going off on the tangents we wanted. He was never rushed, but yet managed to finish the tour in the three hour time frame.

The story of the North End of Boston could be the story of any immigrant area in the United States, but the uniqueness of this particular community was made clear. Its early colonial history remains highly visible in the presence of Paul Revere's home and the Old North Church. It's African American roots are less visible up at the Copp's Hill burial ground. The legacy of its former Irish inhabitants are there in its street signs, old churches, and buildings once frequented by Kennedys. Our tour guide recalled the memories of the area's Jewish residents on streets where synagogues once stood. He even pointed out the last Jewish business owners in town to us. All the immigrant histories overlapped and all were neatly woven back and forth along the threads of time. The information we were given raced back and forth along the community's chronology as we rounded neighborhood corners and examined the architecture, objects, man-made and natural topography of the North End.

Though not one to take any old tour, I will again take one with Context. I have invited my husband to join me to discover the Brahmins of Boston in the spring and will seek out their tours in other cities that I visit. Their program was more of a college course by foot than the typical historical tour I've experienced in the past. I wandered the streets of Boston with an art history professor in my younger days, when everything was exciting to me and the teacher made every building come to life. Context Boston is on par with that experience of my youth. I would highly recommend it to anyone interested in gaining a full understanding of a community and its history.
***
For more information about my tour and for more images of Boston's North End see ArchivesInfo on Facebook
Posted by archivesinfo at 9:37 AM