Open House at the Museum of Fine Arts, Boston - A Family Visit 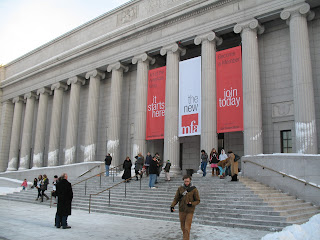 I spent yesterday on a family trip to the MFA's special Martin Luther King Day open house. It was my first time visiting the Museum since the opening of the new American wing. I interned in the archives at the museum for two years in the early 1990s as a graduate student and made many trips here as an undergrad art history student in New England, so I hold a special affinity for the place. I do not make it down as often as I would like to now and it always feels like a coming home of sorts when I enter the building.

This is still the old museum I know, but it has been pushed to exude the world class status that it should be afforded because of its remarkable collections. Right from the start, the re-opened grand entrance gives one a sense of entering a remarkable institution. The addition of the building has retained the feeling of the original building, but with spaces molded specifically to frame the collections for which Boston is best known. Sargent, Copley and Cole are among the American "masters" that are now afforded more room and are properly highlighted as gems among New England's heritage. My favorite works of art, for the most part, did not disappoint me. 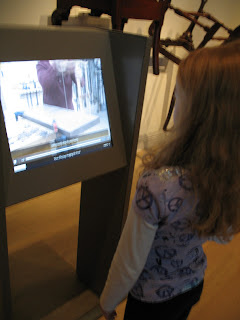 This trip with my family invited me to see art through my child's eyes and I therefore did not get to do all the things I probably would have done on my own. I did not get to visit the library and archives to see if there were any changes, to examine label text as closely as I normally would, or to wander in a completely serendipitous way to gain a good sense of exhibit flow. We had specific things we wanted to see before anyone tired and we stopped to see things for which I normally wouldn't stop. There was plenty to keep my seven-year-old engaged. I found that this may be the perfect age to start seriously sharing art museums with a child. We last visited here a couple of years ago and the experience seemed more like dragging her around while trying to anticipate what might engage her. This time she was able to tell us what interested her. However, perhaps if we didn't experience our last trip here (and trips to the Philadelphia Museum of Art, Peabody Essex and a few others in between) she still would not be in a state of mind to start appreciating art on this level, learning and taking a deep interest in the exhibits.

A free open house is not an ideal day to examine my favorite paintings. There was much jostling to see more familiar works. In fact, there were few quiet places in the museum at all. The American wing was the most popular spot, but there were people everywhere. I found some respite in the rooms of Asian artifacts, but if I were attending for any kind of meditative experience there, I wasn't going to find it. As a cultural heritage professional (you can take the girl away from the job for a day of rest, but the mind-frame always stays) it was interesting to see how the public interacted with exhibits. I assume that many people who attended were not regular museum goers, but were encouraged to come here because entrance was without charge. Many people walked around with cameras to engage in a personal way with what they saw. Most seemed to know to turn off the flash. In other cases, I saw people touching statues as in the case of one man who leaned his head on a bust to have his photo taken with it and a three year-old petting the stone toes of an Egyptian saying "foot. foot" while his parents looked the other way. I also saw people lying on the floor and walking around without shoes. All of this is to be expected to at least some extent in such a large gathering and I was happy to see people beyond what we have come to know as the average museum attendee here, but I think the museum needed to be more attentive to the crowds. 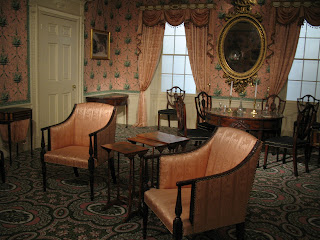 Here are a few impressions and highlights:
- I was very impressed with room recreations of beautiful old New England houses. My family and I enjoyed imagining ourselves living in those spaces and admired the true to era wallpapers and decorative sensibilities. The many period rooms added a new dimension to the experience offered by the MFA, allowing us to be enveloped in a specific time as we would in a specialized house museum. 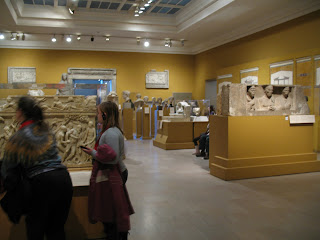 - I was also impressed with new colors in old exhibit spaces. I found the yellow in the Roman section especially dramatic, with a clean / shiny / new feeling that I felt highlighted the objects especially well. Every space throughout the museum was welcoming and collection exhibit spaces as a whole felt more modern and cared for. Even the gray exhibit halls of decorative arts that used to lead me to the archives were gone.
- I was impressed and excited by the number of works that the MFA can now exhibit and that they have taken out of storage. Our prime regional museum should be able to display and show off its best work. It can now do so. The MFA is not only a world class institution, it is also home to New England's most talented artists who should be on stage accordingly here. We have Monets to appreciate, but I'm glad that our American artists now have the prominent wing that they deserve.
- I was impressed with a combination of media education tools and "on spot" real-person guides. Videos immediately attracted my daughter and taught her all about furniture making. She now wants to give it a try.
- I was not impressed with parking. Parking has always been a problem here and it seems as if issues have not been resolved.  The lot was jammed by late morning - literally. People were stuck at the top of the garage with no spaces and no room to turn around. Cars should have been cut off from this area before this kind of chaos occurred.
- I was also not impressed with the cafeteria. The service was slow and there were no places to sit where we ate in the basement. We should have been informed of the eating space across the museum that we had forgotten about or directed to seating upstairs outside the gift shop. Even though parking and eating are secondary to viewing exhibits, they are both part of the day's experience. The museum seemed ill-prepared to handle this sort of crowd and there was much obvious frustration.
- I was also concerned about the lack of museum guards as we watched visitors' bad behavior. Though I do not like when guards are looming over me, seemingly waiting for me to make a wrong move, yesterday I had the opposite experience. I saw few guards and much behavior that could seriously damage collections. More attention to visitors and even some gentle museum etiquette training was necessary.
- Finally, some of the lighting was problematic. For example, there seemed to be a glare on Paul Revere wherever I stood.

Despite a few concerns, my family had a wonderful time at the MFA. Snow is falling again in New Hampshire this morning, but I will carry the good warm feelings that the museum left with me yesterday through my day  today. I am anxious to return to Boston to see more -- but perhaps on a quieter day. 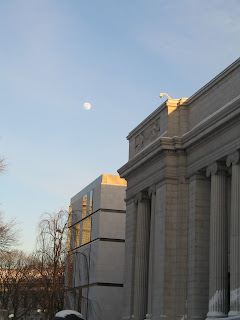 See more on the MFA expansion and remodelling
Posted by archivesinfo at 8:33 AM